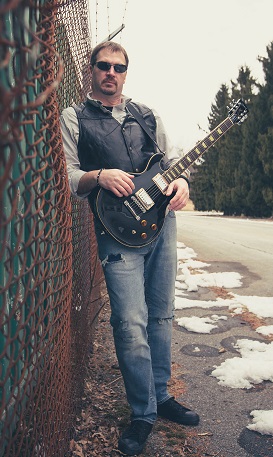 Eric started playing guitar as a young teen in the early 80s, hooked on music after hearing early Ozzy and Van Halen on DC 101 and 98 Rocks. Digging deeper into hair metal, his influences quickly became Judas Priest, Iron Maiden and Motley Crue, among others, while he studied with Al Mason (R.I.P) and Jeff Key (Cracked Actor) at Carpenter’s World of Music in the late half of the 80s.
It was during these formative years Eric’s path first crossed with Jeff Barnhart and Butch Barnhart’s brother Petey. Friends and brothers for life after those years (ask Jeff about the Mercersburg Police crashing a jam session in an attic on the square), the three spent many hours honing their skills.
After taking a hiatus from playing during the 90s, Eric got back into playing in the 2000s, doing the Christian Rock scene throughout South Central Pennsylvania.
Eric reconnected with Jeff at the Maryland Institute of Music’s grand opening in 2017, where he then started studying with Dean Cramer (Funny Money, So Low), Bob Pare (Ever Rise) and Justin Parks (So Low, Lead Foot).
After months of coming back up the learning curve, Eric had the privilege of performing a handful of songs with Jester at the Dawg House in September 2018. The rest is history in the making with his formally joining Jester in March of 2019…
Scroll Up